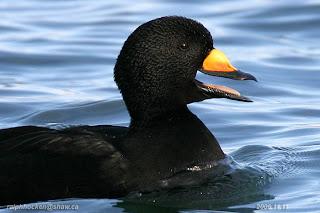 Black Scoter: Ralph Hocken Photo.
The Tuesday bird walk went to the Little Qualicum River Estuary in Qualicum Beach. The morning was cloudy but quite warm. The highlights included seeing five Long-tailed Ducks, hundreds of Red-necked Grebes and many Horned Grebes off shore from the viewing platform off Highway 19A. A large flock of Black Scoters were seen not far from shore at the estuary. Further off shore there were thousands of Common Murre on the water.