American Goldfinch are returning in great numbers now.(I had about 15 males and 5 females in my backyard in Parksville yesterday) They are like drops of gold at the feeder. Goldfinch like to eat Nyjer Seed as well as Hulled Sunflower Chip. With a nyjer feeder one is able to create a feeding station that is just for the finches. 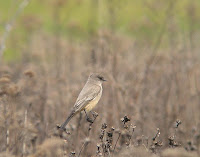 Say's Phoebe's... We receive a few reports each spring.. An beautiful flycatcher! Pictured here is the Says Phoebe that showed up at the Nanaimo River Estuary April 14th. Other reports from Gabriola Island, Legacy Marsh in Lantzville & The Englishman River Estuary. Photo Guy Monty
No comments:

Recently we have had a few reports of Mountain Bluebirds in the Central Island Area. Although the birds don't breed here we hear about a few bluebirds every spring.
Last year they were spotted at the Nanaimo River Estuary and Neck Point. So far this year we have confirmed sightings at the Somass Estuary in Port Alberni (6 in total) and 9 at the Englishman River Estuary near the look out. Another report of 1 bluebird came from Gabriola Island on the South end.
Let us know if you see any Mountain Bluebirds! thebackyard@shaw.ca or 205.390.3669
No comments: