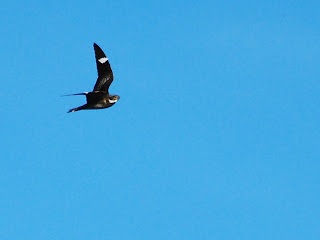 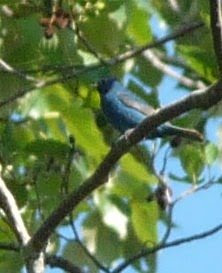 An Indigo Bunting was seen today along Renz Road near the Coldwater Farm in Parksville
No comments: 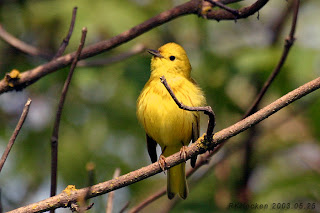 Please remember, when reporting a sighting, to leave your name and phone
number, along with the date, name and location of your sighting.
Monday, July 21, 2008:
A Pine Grosbeak was spotted at a backyard feeder in the 2900 block of Hammond Bay Road in Nanaimo.

Sunday, July 20:
RARE BIRD ALERT:
A White-tailed Kite was seen near Westwood Lake flying east over Highway 19.
RARE BIRD ALERT
An Elegant Tern was spotted rapidly flying south near Ten Mile Point in Saanich in Victoria.
The Sunday Bird Walk went to Buttertubs Marsh in Nanaimo. Fourteen birders found the following thirty-one species of birds:
Pied-billed Grebe, Turkey Vulture, Canada Geese, Mallard, Wood Duck, Common Merganser, Greater Yellowlegs, Northern Flicker, Northwestern Crow, Common Raven, Purple Martin, Tree Swallow, Violet-green Swallow, Barn Swallow, Chestnut-backed Chickadee, Red-breasted Nuthatch, Bewick's Wren, Marsh Wren, Cedar Waxwing, American Robin, European Starling, Yellow Warbler, Common Yellowthroat, Spotted Towhee, Chipping Sparrow, Song Sparrow, Red-winged Blackbird, Purple Finch, House Finch, American Goldfinch and House Sparrow. Thank-you Susan for leading the walk.
A female Sooty Grouse with two fledglings and a pair of Chipping Sparrows were seen at the Notch Hill in Nanoose Bay.
Saturday, July 19:
A Tufted Puffin, Cassin's Auklets, Common Murres, Rhinoceros Auklets, over 100 Heermann's Gulls, 100's of California Gulls, three Surf Scoters, a White-winged Scoter, a Common Loon, a Brandt's Cormorant and a flock of twenty-seven Bonaparte's Gulls were seen at Otter Point on the west side of Vancouver Island.
A large number of MacGillivray's and Wilson's Warblers, along with a Tree Swallow and a flock of Barn Swallows were seen at Gordon's Beach on the west side of Vancouver Island.
An off shore Red-throated Loon , 56 Western Sandpipers, four Least Sandpipers, one Sanderling and two Black Turnstones were seen on the estuary at Port Renfrew on the west side of Vancouver Island.
A Whimbrel was seen at Whiffin Spit on the west side of Vancouver Island.
Friday, July 18:
Two Great Horned Owls were seen in a yard in Fairwinds in Nanoose Bay.
Thursday, July 17:
A Eurasian Collared Dove was photographed by the Millstream River just off Jinglepot Road in Nanaimo.
Wednesday July 16:
Two Great Horned Owls were seen in a yard in Fairwinds in Nanoose Bay.
A Pacific-slope Flycatcher was seen along Cannor Crescent in Qualicum Beach.
Tuesday, July 15:
A Green Heron was seen flying over Somenos Marsh in Duncan.
A House Finch is visiting and feeding on hummingbird feeders in the 4100 block of Gulfview Drive in Nanaimo.
A Silver Pheasant was seen on Jinglepot Road between Westwood Lake Road and the Shady Mile area in Nanaimo.
Sunday July 13:
A Killdeer was seen leading a chick about the size of a soft ball from above Hammond Bay Road through yards and down to the lagoon to Piper's Lagoon Park in Nanaimo. It would call and wait for the chick to catch-up and then fly further away. When the parent bird saw people watching them, it did the fake injury maneuver, attempting to get the focus off the chick, until the people left. 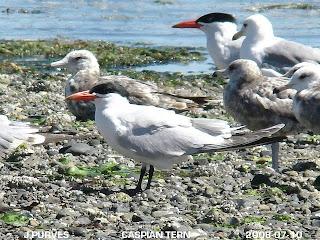 Sunday, July 13, 2008:
The Sunday Bird Walk went to McGregor Marsh in Nanaimo. Among the highlights was the sighting of a Cassin's Vireo gleaning insects from the leaves in a tall tree. We saw an American Robin fly into it's nest to feed four chicks. The sighting of the morning was a Red-eyed Vireo going to and from it's nest in the big leaf Maple Trees (the trees known as the Warbler Trees as we usually see a great number of Warblers in it). We were all able to watch the Vireo peer into the nest and then move into it and nestle down. We could see it's head with the red eye and eye streak. The Vireo left the nest and returned several times. It was a fantastic sight for us all.
Fifteen birders found the following thirty-three species of birds:
Turkey Vulture, Mallard, Wood Duck, Hooded Merganser, Merlin, California Quail, Band-tailed Pigeon, Rufous Hummingbird, Downy Woodpecker, Northern Flicker, Pileated Woodpecker, Belted Kingfisher, Red-eyed Vireo, Warbling Vireo, Cassin's Vireo, Northwestern Crow, Common Raven ,Chestnut-backed Chickadee, Bushtit, Red-breasted Nuthatch, Bewick's Wren, Swainson's Thrush, American Robin, Orange-crowned Warbler, Black-throated Gray Warbler, MacGillivray's Warbler, Spotted Towhee, Song Sparrow, Red Crossbill, Purple Finch, Dark-eyed Junco, House Finch and American Goldfinch.
Saturday, July 12:
An Osprey was spotted circling above the Country Club Shopping Centre and the old Island Highway in Nanaimo.
Approximately fifty Common Nighthawks and twelve Black Swifts were seen hawking insects for about 45 minutes over the 2500 block of Glenayer Drive in the Departure Bay area of Nanaimo.
A Western Meadowlark was seen in the saltmarsh habitat on the short grass at the end of Seabroom Road off Kaltasin Road in Sooke.
Red-necked Phalaropes, a Red Phalarope and Heermann's Gulls were seen off Jordan River north of Sooke.

Wednesday, July 09:
A Barred Owl with two fledglings was seen at Bowen Park in Nanaimo.
Tuesday, July 08:
Five Caspian Terns were seen in with California and Glaucous Gulls resting along the gravel on the Columbia Beach side of the mouth of French Creek. Flying over head were several Purple Martins and a Belted Kingfisher.
There were many Canada Geese and a family of Common Mergangers with fourteen youngsters along French Creek.
A Heerman's Gull, three Caspian Terns and four Western Sandpipers were seen on the ocean across from Judges Row in Qualicum Beach. 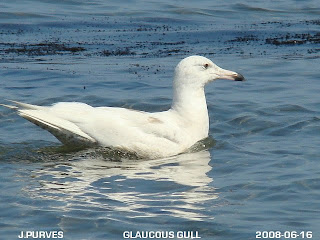