Saturday May 26:
A pair of NORTHERN ORIOLES was seen at the marsh in Port Alberni.
Ninteen BAND-TAILED PIGEONS were seen visiting feeders along Southwind Drive in upper Lantzville.

Friday May 25:
A female LAZULI BUNTING was seen at the Carmanah Point lighthouse on the west coast of Vancouver Island.
A COMMON GRACKLE was spotted in Tofino.


Thursday May 24:
WILSON'S WARBLER, CHIPPING SPARROW, BLACK-HEADED GROSBEAK and a large flock of PINE SISKINS were seen in the 100 block of Cathmount Place in Nanaimo.
A BULLOCK'S ORIOLE was spotted at Ucluelet on the west coast.
A RED-BREASTED SAPSUCKER was seen poking holes in an Eucalyptus Tree in a yard at Deep Bay.

Wednesday May 23:
The Wednesday Bird Walk went to the Top Bridge Trail in Parksville. The big highlight of the morning was the sighting of a different seabird that we were able to identify as a MASKED BOOBY. An amazing sighting for this area! Following is a brief description of the bird:
We saw a large, very long winged mainly white bird fly right overhead in the direction of the Georgia Strait. The wings were very long, slender and pointed at the tips. The head was all white with a yellow bill and some black at the base of the bill. The head and neck stuck well out in front and the tail projected well out the back so that the wings appeared to be positioned about halfway along the body. It was clearly not a gull or tern and seemed at least as big as a Glaucous-winged Gull, likely bigger. The under sides of the wings were mainly white with some duskiness along the trailing edge and out towards the tips. The flight was strong and direct. It was also not very high, perhaps twice treetop height. Eight or ten flaps and it was out of sight. .
Fourteen birders found the following forty-three species:
MALLARD, CALIFORNIA QUAIL, MASKED BOOBY, TURKEY VULTURE, BALD EAGLE, COOPER'S HAWK, KILLDEER, SEMI-PALMATED SANDPIPER, GLAUCOUS-WINGED GULL, RUFOUS HUMMINGBIRD, HAIRY WOODPECKER, NORTHERN FLICKER, PILEATED WOODPECKER, PACIFIC-SLOPE FLYCATCHER, CASSIN'S VIREO, WARBLING VIREO, NORTHWESTERN CROW, COMMON RAVEN, VIOLET-GREEN SWALLOW, NORTHERN ROUGH-WINGED SWALLOW, CHESTNUT-BACKED CHICKADEE, BEWICK'S WREN, WINTER WREN, AMERICAN DIPPER, HERMIT THRUSH, SWAINSON'S THRUSH, AMERICAN ROBIN, EUROPEAN STARLING, ORANGE-CROWNED WARBLER, YELLOW WARBLER, TOWNSEND'S WARBLER, YELLOW-RUMPED WARBLER, WILSON'S WARBLER, SPOTTED TOWHEE, CHIPPING SPARROW, SONG SPARROW, WHITE-CROWNED SPARROW, DARK-EYED JUNCO, BLACK-HEADED GROSBEAK, BROWN-HEADED COWBIRD, PURPLE FINCH, PINE SISKIN, AMERICAN GOLDFINCH.
VESPER SPARROWS were seen singing from the southern most perimeter fence which can be viewed from the dirt road south of the Nanaimo Airport in Cassidy.
A NORTHERN MOCKINGBIRD was seen near the Nanaimo Airport in Cassidy at the southern perimeter fenceline.
A pair of AMERICAN GOLDFINCH are visiting feeders along Kilpatrick Road in the Junglepot area of Nanaimo.

Sunday May 20:
A SOLITARY SANDPIPER was seen on the north shore of Long Lake in Nanaimo.
A WESTERN TANAGER was seen along West Crescent in Qualicum Beach.

Saturday May 19:
Twelve BAND-TAILED PIGEONS were visiting ground feeder and a NORTHERN FLICKER is visiting the suet feeder in the 100 block of Meridian Way in Parksville.

Saturday May 19:
PINE GROSBEAKS were seen along Heath Avenue in Parksville.

Friday May 18:
A pair of CALIFORNIA QUAIL are visiting a yard in the Lynburn area of Nanaimo.


Thursday May 17:
A ROUGH-LEGGED HAWK was seen along Northwest Bay Road near Wall Beach Road in Nanoose Bay.
A MOURNING DOVE was spotted in the 100 block of Meridian Way in Parksville.
A LARK SPARROW was seen in the 2600 block of Lungren Road in the Divers Lake area of Nanaimo.

Whimbrel at the High School grounds in Cedar : Photo by Robin Bodnaruk

Monday May 14:
A BROWN PELICAN was spotted at the French Creek marina area in French Creek.
Two MOURNING DOVES were seen along Maxey Road in south Nanaimo.
A BLACK-HEADED GROSEBEAK was seen along Birchwood Road in Ladysmith.
A BULLOCK'S ORIOLE, YELLOW WARBLERS and MARSH WRENS were seen at Buttertubs Marsh in Nanaimo.

Sunday May 13:
WESTERN TANAGERS, RUFOUS and ANNA'S HUMMINGBIRDS were seen in the 4100 block of Gulfview Drive in Nanaimo.

This morning we received a report of a LARK SPARROW visiting a backyard feeder in the Divers Lake area of Nanaimo. There have been very few records of a Lark Sparrow in Nanaimo. For more information about its location please call the store, 390-3669.
No comments: 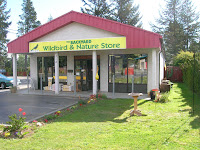 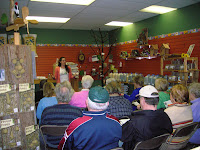 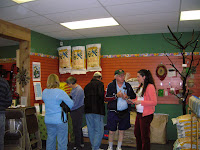 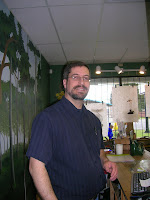 The Bug Lady seminar was a wonderful success. For about 17 guests, Jessica Dawe, from The Bug Lady gave an enthusiastic talk about pest management in the garden. She talked about creating a garden that is balanced so that "the right bugs" are already there. From time time to time, she pointed out, things get out of balance and that's when we visit retailers like The Backyard Wildbird & Nature Store to pick up a bag of ladybugs (native species) to treat an aphid problem or a package of Weevilution for the weevils affecting your Rhododendron's. She was full of wonderful insights and recommendations. On the Bug Lady website there are some fantastic resources as well. Companion planting, integrated pest management and bug identification.
Thanks Jessica!
No comments:

Today we have received three reports of hundreds to thousands of Swifts in Ladysmith, Port Alberni and Royston. In two of these reports the Swifts were seen flying down chimneys by and some getting right in to the houses. There are two species of Swifts that are commonly seen on the island, Black and Vaux's Swift. One of the reports mentioned it as watching something out of the Alfred Hitchcock movie "The Birds".
If you have a bird sighting email The Backyard Wildbird & Nature Store at thebackyard@shaw.ca. CB
No comments:

Friday May 04:
Four AMERICAN GOLDFINCH were seen at feeders at Lantzville Road and Superior Roads in Lantzville.
A SILVER PHEASANT was at feeders in the 5100 block of Lauguna Way in Nanaimo.

Thursday May 03:
A YELLOW-HEADED BLACKBIRD in with a flock of BREWERS BLACKBIRDS were seen perched on a fence on the south side of Northwest Bay Road just to the east of Wallbeach Road in Nanoose Bay.
A LESSER CANADA GOOSE was seen in with five CANADA GEESE at Cowichan Bay.
Two ROUGH-WINGED SWALLOWS, four CHIPPING SPARROWS, three YELLOW WARBLERS and a PURPLE MARTIN were seen at Somenos Marsh in Duncan.

DON’T FORGET TO SIGN UP
FOR THIS VERY INTERESTING FREE WORKSHOP!
DEAL WITH GARDEN PESTS NATURALLY!

The Birdman is pleased to host a morning with The Bug Lady!

Thursday May 3rd
11am -Noon FREE

The Bug Lady will be in the store to answer your questions about beneficial bugs.
· Learn how to identify bugs in your garden (Good Bug? Bad Bug?)
· Integrated Pest Management (ladybugs, nematodes, red wiggler worms etc)
· Common garden problems.
· When and how to apply beneficial bugs?
· How to deal with cranefly, aphids, mealybugs, fungus gnat, spidermite, slugs, composting and more!