There has been a lot of concern surrounding the recent avian flu outbreak with people wondering if it is safe to continue feeding their backyard birds.

Click here to start or visit Bird Studies Canada and Environment & Natural Resources Canada to keep up to date. 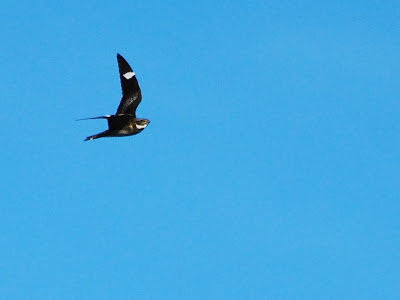 Two Osprey were seen in a nest at Bowen Park in Nanaimo.

Four Merlins have make their home on Sugarloaf Mountain in Nanaimo.

Saturday July 24:
Western Tanager, Black-throated Grey Warbler, Pacific-slope Flycatcher, Swainson's Thrush were seen along with Belted Kingfishers and Northern Rough-winged Swallows that are nesting in a sand cliff above the Little Qualicum River in the Cedar Grove Campground in Qualicum Beach.

A Black-headed Grosbeak is a frequent visitor to feeders along Meridian Way in Parksville.

Friday July 23:
Fifty-six Common Nighthawks and three Vaux's swifts flew by from east to west over the 2500 Block of Glenayr Drive in Nanaimo.

A Semipalmated Plover, a Semipalmated Sandpiper along with several Western and Least Sandpipers were seen at the mud flats on the Plummer Road side of the Englishman River Estuary in Parksville.

Wednesday July 21:
A Vesper Sparrow, seven Turkey Vultures and two House Finch were heard and seen over the Cassidy Airport in south Nanaimo.

An Osprey was seen heading towards Westwood Lake in Nanaimo.

An Osprey was spotted in the pond at the bottom of the hill at Nanaimo North Town Centre in north Nanaimo.

A large flock of over thirty Common Nighthawks was seen flying above the Nanaimo Golf Club along highway 19A.

Over seventy Common Nighthawks and twenty Black Swifts were seen hawking insects in a spectacular twinkling 'ballet' flight over the 2500 block of Glenayr Drive in Nanaimo.

A Wandering Tattler and a Marbled Murrelet were seen off Amphimite Point at Tofino.

A Western Tanager was seen in a backyard at the northend of Gabriola Island.

Sunday July 18:
A Common Nighthawk was calling loudly, and hawking insects at close range and made a few dramatic dives that produced wing-whistle as it pulled out above Colbourne Drive in North Nanaimo.

A family of Merlin was spotted in a yard in Yellowpoint at Cedar.

Two Purple Martins were observed hawking bugs and scooping water near the dyke and old observation tower. An Eurasian Collared Dove was seen perched on a snag at the back of the trailer court at Buttertubs Marsh in Nanaimo.

An Eurasian Collared Dove has been seen among backyard trees along Honeysuckle Terrace in Nanaimo.

Thursday July 15:
A Stellar's Jay was seen in a backyard at the east end of Lost Lake Road in Nanaimo.

A mixed flock of Least and Western Sandpipers were seen at Englishman River Estuary, Plummer Road side in Parksville.

Three Black-bellied Plovers were seen at the Shelley Road of the Englishman River Estuary in Parksville.

Three Black Turnstones were seen along the shore from the viewing platform along highway 19a in Qualicum Beach.

A Downy Woodpecker, Steller's Jay and Bushtits were seen along Dawkins Lane in Nanaimo.

Cedar Waxwings were spotted at Morrell Wildlife Sanctuary in Nanaimo.

Thursday July 15:
A Merlin was seen at MacGregor Marsh in north Nanaimo.

A Parasitic Jaeger were seen off-shore at Columbia Beach.

A Brant was spotted swimming with a flock of Canada Geese at French Creek.

Sunday July 11:
A Brant Goose was seen with a flock of Canada Geese at Nile Creek. 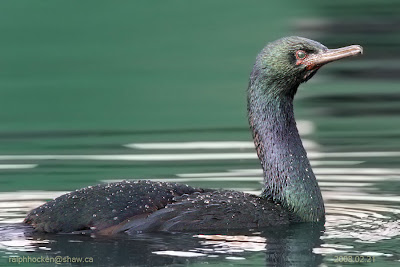 Saturday July 10:
An American Wigeon was seen at Buttertubs Marsh in Nanaimo.

Common Nighthawks were heard over Lancashire Avenue in Nanaimo.

A Olive-sided Flycatcher was heard and seen near the corner of Despard Avenue and Meridian Way in Parksville.

Monday July 05:
A Red-throated Loon, a Pelagic Cormorant and two Pigeon Guillemots were seen from the Englishman River, Plummer Road side, looking out on the Strait of Georgia in Parksville. 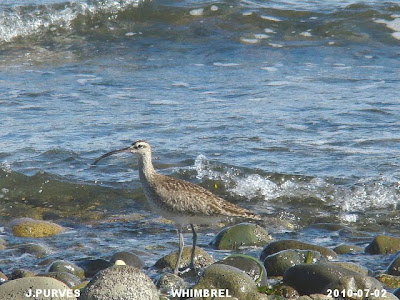 Saturday July 03:
Two Semi-palmated Sandpipers among seventy Least Sandpipers and ten Western Sandpipers were seen on the Holden Creek side of the Nanaimo River Estuary.

Friday July 02:
An Eurasian Collared-dove was seen preening itself at the top of the snag on the dyke near where the fence crosses between the tower and the Third Street parking lot. It then flew off over the marsh and the houses on the Bird Sanctuary Drive at Buttertubs Marsh in Nanaimo.

There is an Olive-sided flycatcher leading the dawn chorus each day at the top end of Colbourne Drive in Nanaimo.

Two Whimbrel were seen along the shore at Columbia Beach.

A Flock of Red Crossbills was seen in the 1900 block of Harlequin Crescent in Nanoose Bay.

Saturday June 26:
A pair of Evening Grosbeaks were visiting feeders at the Nanoose Estuary in Nanoose Bay.