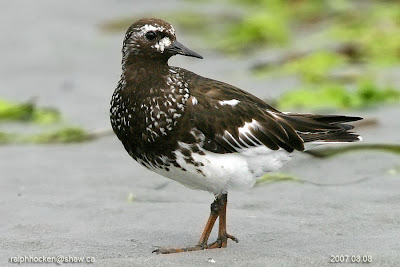 Black Turnstone at Columbia Beach:
Photo by Ralph Hocken
To report your sightings
please phone the Store at 390-3669
or e-mail us at thebackyard@shaw.ca
www.thebirdstore.blogspot.com

Thursday August 16:
Two Clark's Grebes in breeding plummage were seen off shore at Port Renfew.
A Common Eider was spotted flying very fast along the strait of Juan de Fuca.

Wednesday August 15:
A juvenile Black-headed Grosbeak were seen visiting feeders at the corner of Lantzville and Superior Roads in Lantzville.
A Sharp-shinned Hawk was perched on a fence, keeping a lookout on the birdfeeders, in the 100 block of Meridian Way in Parksville.

Tuesday August 14:
Over one hundred Sandhill Cranes were seen landing in the Estuary in Courtenay.

Sunday August 12:
A Barred Owl was spotted perched in an arbutus tree at Pipers Park, next to the Museum, in downtown Nanaimo.

Saturday August 11:
Six Black Swifts were seen over Ladysmith.
Four Red Crossbills, an Olive-sided Flycatcher and a Willow Flycatcher were spotted at Chemainus Lake.
A family of Black-headed Grosbeaks were spotted at the Pulp Stone Quarry on Newcastle Island.

Wednesday August 08:
A Common Eider, was observed moving very quickly just above the water, along Columbia Beach not far from the tide line.