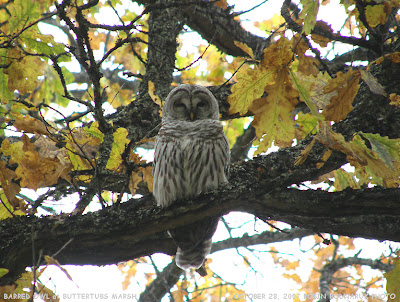 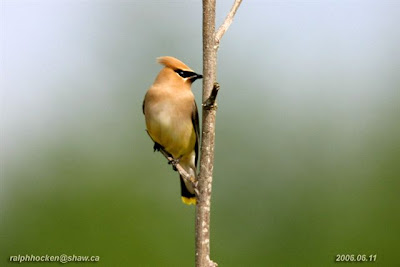 Sunday December 16:
Two Great Horned Owls were seen in the 1100 block of Morrell Circle in Nanaimo.

Saturday December 15:
A Townsend's Warbler was seen visiting suet feeders in the Seabreeze Mobile Home Park near Beck Creek along Maki Road in south Nanaimo.
A Sandhill Crane was seen at the corner of Kite Way and Osprey Lookout in Nanaimo.
Twelve Northern Fulmars, four of which were the northern sub-species white phase, rare in this area were seen off Gordon's Beach near Sooke.

Friday December 14:
RARE BIRD ALERT "PARAKEET AUKLET"
A PARAKEET AUKLET was seen in with a large flock of Common Murres, Ancient Murrelets, Rhinoceros Auklets and Pigeon Guillemots at Botanical Beach near Port Renfrew. Take the trail down to Botanical Beach, follow the trail down the hill to the washrooms take the fork in the trail to the left, walk down the stairs go to
the water. Please do not get too close to the water as large waves come into the lower areas and can sweep a person out to sea in seconds.
A Barred Owl was calling in the Colliery Dam Park off Harewoods Minds Road in Nanaimo.

Thursday December 13:
A Sandhill Crane was spotted eating bugs along Overlook Drive in Nanaimo
.
Wednesday December 12:
A Townsend's Warbler was seen at suet feeders along Kenwill Drive in north Nanaimo.

Tuesday December 11:
A winter plumage Yellow-billed Loon, two Barrow's Goldeneye, two Horned Grebes, a Common Merganser, two Bufflehead and a Pied-billed Grebe were seen at the Schooners Cove Marina in Nanoose Bay. The Loon was seen about ten feet from the road looking towards the boat basin.
A Eurasian Wigeon was seen on the golf driving range in Duncan.

Monday December 10:
Two Great Horned Owls were seen in the 1100 block of Morrell Circle in Nanaimo.

Sunday December 09:
A Barred Owl was seen near the north parking lot at Buttertubs Marsh in Nanaimo.