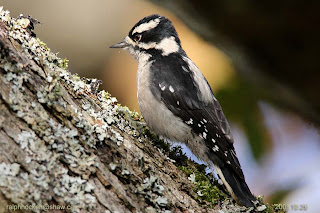 Highlights of the morning that caught our attention included a large flock of Bushtits and Dark-eyed Juncos bobbing from bush to bush just after we started the walk. A large flock of Golden-crowned Sparrows was feeding on the ground. We spotted a Red-throated Loon through our spotting scopes riding the choppy seas off shore. During the morning there were several lines of Surf Scoters, White-winged Scoters, Black Scoters and Pacific Loons flying low over the water. Four Black Oystercatchers, a Herring Gull and five Glaucous-winged Gulls were resting at the point on a gravel bar. Near the end of the walk we watched as two Fox Sparrows and two Spotted Towhees fed in the low bushes near the old farm house and we listened to a Downy Woodpecker call.