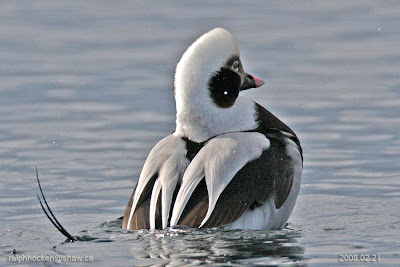 The Tuesday Bird Walk went to Deep Bay. The morning was sunny with calm winds but it was a little nippy at -7c. The sea was like glass, giving us ideal conditions to observe the large rafts of seabirds that were out on the water. The highlights of the morning included seeing and hearing a large raft of singing Black Scoters near the shoreline. One Dunlin and one Black-Bellied Plover made an appearance not five feet from us along the shoreline. There were a large number of White-winged Scoters and a smaller raft of Surf Scoters not far from out on the water. Four Trumpeter Swans flew up island near Denman Island. A Pigeon Guillemot, along with two Marbled Murrelets, stayed off the point for the best part of the morning, giving us great long looks. The Long-tailed Ducks entertained us all morning with their singing as they swam close to shoreline at the Point.
Thirteen birders saw and hear the following thirty-eight species of birds:
Canada Goose
Mute Swan
Trumpeter Swan
American Wigeon
Green-winged Teal
Greater Scaup
Harlequin Duck
Surf Scoter
White-winged Scoter
Black Scoter
Long-tailed Duck
Bufflehead
Common Goldeneye
Red-breasted Merganser
Pacific Loon
Common Loon
Horned Grebe
Red-necked Grebe
Double-crested Cormorant
Pelagic Cormorant
Bald Eagle
Cooper's Hawk
Black-bellied Plover
Black Turnstone
Dunlin
Glaucous-winged Gull
Pigeon Guillemot
Marbled Murrelet
Rock Pigeon
Northwestern Crow
Bushtit
American Robin
European Starling
Spotted Towhee
Song Sparrow
Golden-crowned Sparrow
House Finch
House Sparrow