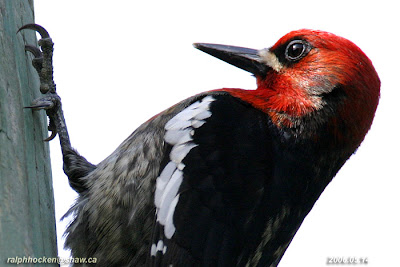 
The Tuesday bird walk went to Lot Ten along the Little Qualicum River in Qualicum Beach.
The morning was cloudy with a light breeze, but no rain fell during the morning.
We spotted a Peregrine Falcon flying above us as we started out from the Parksville Community Park. There was a Great Blue Heron perched on a rock at Qualicum Beach just past the tide line. We heard and then saw a Red-breasted Sapsucker tapping on a tall snag at the start of the walk on Lot Ten. We had great long looks at a Black-throated Gray Warbler perched in a tall snag at the edge of the forest. An Orange-crowned Warbler flew into the forest edge. As we walked towards the river we heard and then spotted a Red-eyed Vireo gleaning insects, high up in a Big Leaf Maple tree above us. We saw and heard many Swainson's Thrush throughout the morning and we watched a Swainson's Thrush having a bath along the rivers edge. A family of Belted Kingfishers were resting along the rivers edge. A fledging Red-breasted Sapsucker was sitting on the hydro lines above our cars at the end of the walk.