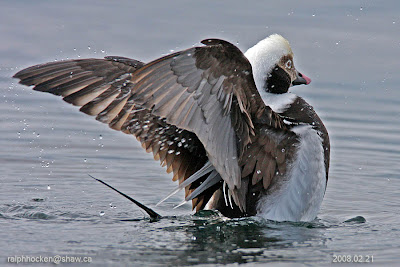 The Tuesday bird walk went to Deep Bay. The morning was windy with lots of rain. The surf was up and pounding on the shore--it was a winter storm in the making for sure! The highlights of the morning included a large number of Long-tailed Ducks just off the Point and a large mixed flock of Black Turnstones and Dunlin just along the shoreline.

Anything or any event that gets local people outside and learning about nature first hand is a win\win for all levels of society. I push environmentally friendly products and techniques in my business because I do appreciate what we have out here... http://SaskwatBlog.blogSpot.com