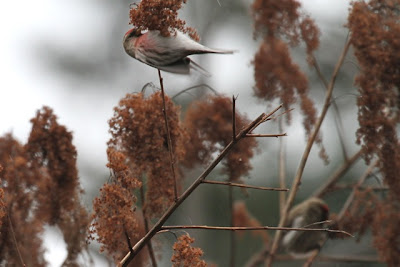 A female Ann’s Humming was spotted gathering nesting material near a feeder in the 11000 block of Pilon Road in Ladysmith .

Saturday, February 11:
Several Evening Grosbeaks, a Townsend’s Warbler and a Cooper’s Hawk are visiting a backyard near Ballenas Road and Cedar Road in the San Pariel area of Parksville.

Wednesday, February 08:
A Townsend’s Warbler and a Red Breasted Sapsucker were visiting a backyard along Doehle Avenue in Parksville.

Five American Coots and one male Common Merganser were seen near the marina in Port Alberni.

A Rough-legged Hawk, a Red-tailed Hawk and a Northern Shrike were seen at the Nanaimo River Estuary in south Nanaimo.

Sunday, February 06:
Ten Evening Grosbeaks were seen at the end of Doehle Avenue in Parksville.

A Cooper’s Hawk was seen visiting feeders behind the Parksville Fire Hall.