The Sunday bird walk went to the Ladysmith Harbour. The morning was sunny with calm winds.  We saw a family of five River Otters just off shore near the parking lot at the start of the walk. Purple Martins were the highlight of the walk and we saw and heard them chatting overhead all morning. Four Purple Martin chicks were seen in the nest cam that has been set up along the dock. Three Pigeon Guillemots were spotted flying low over the water heading down the Strait of Georgia. We saw five Black Turnstones were seen resting along one of the docks along the water. 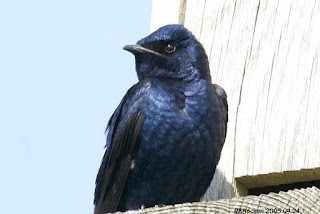 
Saturday, July 16:
Over eighty Common Nighthawks were seen from the VIU parking lot in Nanaimo.


Common Nighthawks see over Meridian Way in Parksville and over


Highway 19A between Parksville and Qualicum Beach.


Over one hundred Least and Western Sandpipers, one Semipalmated Sandpiper, one Greater Yellowlegs and a Long-billed Dowitcher, along with a flock of Canada Geese were seen at the mud flats on the Plummer Road side of the Englishman River in Parksville.


Two Pigeon Guillemots were seen off shore from the Plummer Road side of the Englishman River in Parksville.


A Least Sandpiper was seen along the Millstone River Estuary in Nanaimo.


Sunday, July 10:
.  A Long-billed Dowitcher was seen at the Englishman River Estuary in Parksville