The Sunday bird walk went to Neck Point Park in Nanaimo. The morning was partly clouds with calm winds. Double-crested Cormorants and Pelagic Cormorants were flying up the Strait of Georgia for most of the morning.  We spotted a Pigeon Guillemot flying up the strait. Two Marbled Murrelets were seen offshore swimming and diving for food. We saw four Spotted Sandpipers and a Western Sandpiper along the shore of Sunset Beach. 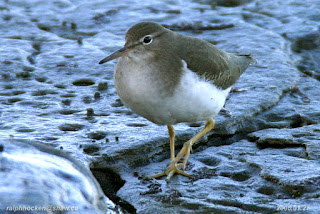 
Four Black Swifts and one Vaux Swift were seen high above Meridian Way in Parksville.


A Green Heron was seen at the Nanaimo River near the Living Forest Campground in south Nanaimo.


A Greater Yellowlegs, a large mixed flock of Least and Western Sandpipers and one Semipalmated Sandpiper were seen on the Plummer Road Side of the Englishman River Estuary in Parksville.


Two Purple Martins were seen at 6:30 pm in the 25 block of Glenayr Drive in Nanaimo.