The Tuesday Bird Walk on May 07, 2019 went to the Top Bridge Trail in Parksville. The morning was sunny with calm winds.  Chipping Sparrows were seen at the start of the walk.  A Wilson’s Warbler was spotted low in the bushes near the trail.  We had the good fortune seeing a MacGillivray’s Warbler landing in a tree right next to the trail, giving us great views.  Many Hammond’s Flycatchers, several Pacific-slope Flycatchers, a Warbling Vireo and a Cassin’s Vireo were heard and then seen on the walk.  Two first of the season Vaux’s Swifts were seen high overhead.  A Swainson’s Thrush was heard calling.  Orange-crowned Warblers and a Black-throated Gray Warbler were seen on the walk. A MacGillivray’s Warbler put on a singing show near the end of the walk.  The songs of spring abounded! 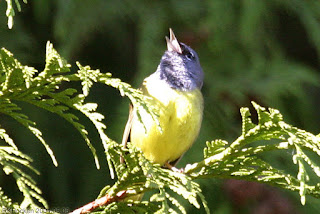 
The Sunday Bird Walk on May 12, 2019 will be going to The Beaver Ponds in Nanoose Bay. Meet at the Backyard Wildbird and Nature Store (6314 Metral Drive in Nanaimo) at 9:00 am or the parking area about one hundreds yards past the four way stop on Power Point Road (take Northwest  Bay Road to Power Point Road) at about 9:20 am.

The Tuesday Bird Walk on May 14, 2019 will be going to Lot Ten in Qualicum Beach.  Meet at the Parksville Community Park (near the Lions Club playground parking area) in Parksville at 9:00 am, or at Kinkade Road on the forest side of highway 19a in north Qualicum Beach at about 9:20 a.m.