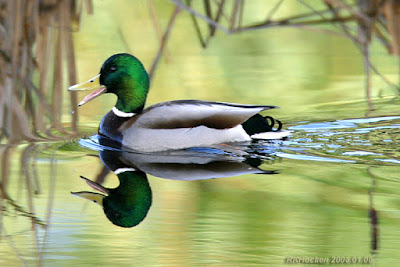 
The Sunday Bird Walk went to Neck Point Park and not the Nanaimo River Estuary as planned due to flooding. Weather was cloudy with a steady cool wind blowing. Lots to see on the water with many birds out in the middle of the strait where there was a difference in water colour, Fraser River flow. The woodland area was quiet but was able to see four species of woodpeckers and a good size flock of Pine Siskins actively feeding in the park. 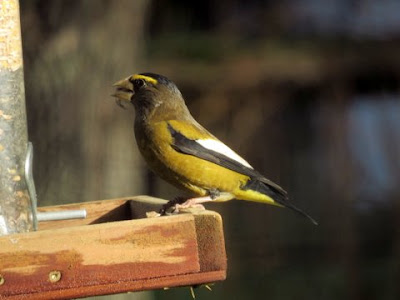 Evening Grosbeaks, approximately 100, were seen at a backyard feeder and wood area on Laurie Road near Qualicum Cheese Works in Qualicum Beach.

The Tuesday Bird Walk went to the Englishman River Estuary, Shelly Road side. The weather was cloudy with a light shower and windy on the water but there was no snow. Start of the walk was quiet but was able to watch an American Dipper on the river. Tide was on the way in but with the weather there was just the usual species on the water. There were plenty of Bald Eagles about with some flying low and over the group. 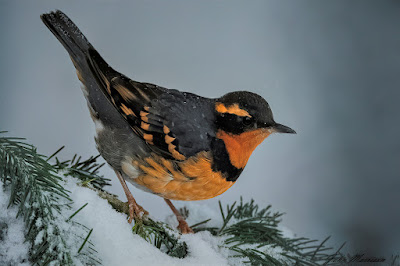 Around the world, people are helping birds by counting them for science.   For release: January 30, 2020

New York, NY, Ithaca, NY, and Port Rowan, ON—Show the wild birds some love by taking part in the 23rd Great Backyard Bird Count (GBBC). This year’s count begins on Valentine's Day, Friday, February 14, and continues through Monday, February 17. Volunteers from around the world count the birds they see for at least 15 minutes on one or more days of the count, and then enter their checklists at birdcount.org.


There is no better time to get involved because we are facing a bird emergency. In a study published by the journal Science last fall, scientists revealed a decline of more than one in four birds in the United States and Canada since 1970—3 billion birds gone. In addition to these steep declines, Audubon scientists projected a grim future for birds in Survival By Degrees, a report showing nearly two-thirds of North America’s bird species could disappear due to climate change. Birds from around the world are facing similar challenges and declines. Counting birds for science is one simple action that individuals can take to protect birds and the places where they live.
"In order to understand where birds are and how their numbers are changing, we need everybody's help," says the Cornell Lab of Ornithology's Marshall Iliff, a leader of the eBird program which collects the GBBC data. "Without this information, scientists will not have enough data to show where birds are declining."
With more than 10,000 species in the world, it means all hands on deck to monitor birds found in backyards and neighborhoods as well as in suburban parks, wild areas, and cities.
"Birds are important because they're excellent indicators of the health of our ecosystems. Participating in the Great Backyard Bird Count is one of the easiest and best ways to help scientists understand how our changing climate may be affecting the world’s birdlife," says Chad Wilsey, interim Chief Scientist for National Audubon Society. "All over the world people are paying more attention to our environment and how it's changing. There’s a lot of bad news out there, but in just 15 minutes you can be part of a global solution to the crises birds and people are facing."
During the 2019 GBBC, bird watchers from more than 100 countries submitted more than 210,000 bird checklists reporting a record 6,850 species–more than half the known bird species in the world. Bird count data become more and more valuable over time because they highlight trends over many years, apart from the normal short-term fluctuations in bird populations.


"At times, we can feel like there’s little we can do on environmental issues," says Steven Price, president of Birds Canada. "The Great Backyard Bird Count gives all bird enthusiasts a chance to help, as well as a great opportunity to include family and friends of all skill levels in a common conservation effort. Go out, have fun, and take heart that you are helping birds and nature!"

To learn more about how to take part in the Great Backyard Bird Count, visit birdcount.org.

Meet at The Backyard Wildbird & Nature Store at 9:00am or at the end of Raines Road gravel parking lot at 9:20 am.


This Tuesday Bird Walk will be going to the Englishman River Estuary – Plummer Road.

Meet at the Parksville Tourist Information Center parking lot, located by Hwy 19A, Northwest Bay road and Franklin’s Gull road in Parksville, at 9:00 am or meet at the trail entrance on Plummer Road at the start of the subdivision at 9:10 am.