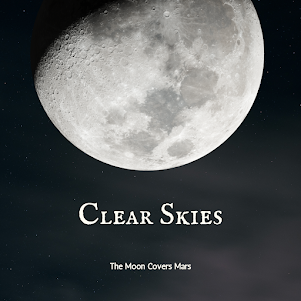 On Wednesday evening, Dec. 7, Canada will be treated to a very interesting event – the Moon will move in front of Mars, which is technically called an occultation.

This is a vivid example of the Moon’s movement across the sky.  Although we usually only notice the movement of the Moon from night to night, it is constantly in orbit around Earth, at an average speed of almost 3,700 km/hour!  On that evening, we can watch Mars disappear as the Moon moves in front of it, and then watch Mars re-emerge sometime later.

The Moon will be a Full Moon, and will be very bright, however Mars is also very bright so will be easily seen.

Where you are in Canada affects what you will see.  The Moon is much closer to Earth than Mars.  From very high in the arctic, the Moon will appear lower in the sky, so Mars will be above its path visually, and there won’t be an occultation.  Likewise, the American eastern seaboard will miss the occultation because visually Mars will be below the path of the Moon.

For western Canada, Mars will be hidden the longest – close to an hour, however for eastern Canada, you will be able to watch Mars disappear and reappear in less than half an hour!

Likewise, because Mars is a disc, visually, and not just a point in the sky like a star, it will take a wee bit of time for the Moon to fully cover it.  Interestingly, the further east your are, the longer it will take for Mars to completely disappear behind the edge of the Moon and reappear on the other side.  That is similar to how long it takes the Sun to set in winter as it disappears at a shallow angle behind the horizon, rather than quickly as some of you might have seen with a sunset near the equator.

The following are the times of Mars’ disappearance and reappearance for representative cites across Canada.  Depending on your location relative to them, the times will be very close.

The very southern edge of Nova Scotia will have a real treat for anyone with binoculars or a telescope.  Because Mars will just skirt the very bottom of the Moon, some viewers will be able to see Mars blink in and out as it passes behind the mountains on the limb of the Moon – something called a grazing occultation.  That is a treat I’ve experienced with a bright star grazing the Moon.

Let us hope for…