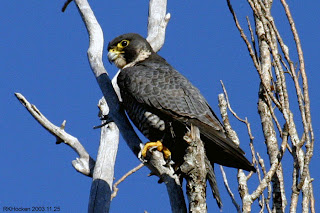 Peregrine Falcon: Ralph Hocken Photo.
To report your sightings
please phone the Store at 390-3669
or e-mail us at thebackyard@shaw.ca
or call the Bird Alert at 390-3029
Check out the Audubon site for the Christmas Bird Count results.
http://www.audubon.org/bird/cbc/hr/
Post your sightings on these sites:
www.thebirdstore.blogspot.com
http://groups.yahoo.com/group/bcbirdingvanisland/messages
Please remember, when reporting a sighting, to leave your name and phone number, along with the date and location of your sighting.

Saturday February 02:
RARE BIRD ALERT--An unconfirmed sighting of a Red-naped Sapsucker in a yard along Whitney Road near Beban Park in Nanaimo.
A Snow Goose was spotted in with a flock of Canada Geese and Northern Pintails in the 5100 block of Benton Page Road in Cassidy.
A large flock of American Robins were seen feeding on a Holly Tree along Mexicana Road in Nanaimo.

Friday February 01:
128 Trumpeter Swans were seen in a field on Cedar Road near Hill Road in the Cedar area.

Thursday January 31:
A Lincoln's Sparrow was seen at the Englishman River Estuary in Parksville.

Tuesday January 29:
A juvenile Northern Goshawk and Anna's Hummingbird were seen on Scarlet Hill Road in the Departure Bay area of Nanaimo.