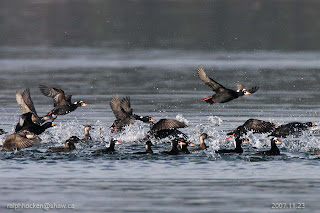 The Wednesday Bird Walk went to . Among the highlights of the morning were the sightings of at least fifty Long-tailed Ducks--many as close as five feet from the shore.

A large flock of Dunlin greeted us as we arrived, flying in a large cloud near a gravel bar. There were large flocks of Pacific Loons, White-winged Scoters, Surf Scoters, Horned and Red-necked Grebes further off shore. We stopped at Nile Creek on the way back and saw about three thousand Thayer’s Gulls along with two California Gulls and a few Mew Gulls roosting along the tide-line. There was a huge raft of an estimated five thousand to six thousand Western Grebes and at least two ’s Grebes a little further out on the Strait. Hugh rafts of Common Murres were seen bobbing further off shore.

The Backyard Wildbird & Nature Store's weekly bird walk in the Parksville/Qualicum Beach area is on Wednesday mornings at 9 a.m. Participants meet at the Parksville Visitor Centre at Highway 19A and Northwest Bay Road in Parksville at 9:00 A.M.
Snow, rain and/or heavy winds will deter us--but we will plan a walk for every week. Everyone is welcome to bring their binoculars and join us for a morning of birding. For the weekly location of the birdwalk, please call Neil Robins at (250) 954-1928 or the Backyard Wildbird and Nature Store at (250) 390-3669.