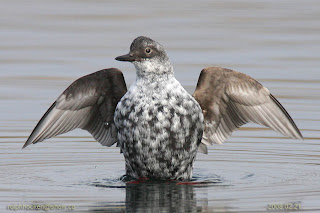 Saturday August 16:
*****Rare Bird Alert--Manx Shearwater*****
A Manx Shearwater was spotted offshore at Botanical Beach, near Port Renfrew on the west coast of Vancouver Island. The Shearwater came from inside the Juan de Fuca Strait and stayed close to shore before heading back out and up the Coastline.
Manx Shearwaters are usually found on the east coast of Canada, but is a rare but regular visitor to the west coast of British Columbia.
Two Black Throated Gray Warblers, a Western Tanager, a Black Headed Grosbeak, Warbling Vireos, and a Yellow Warbler were seen at Springwood Park in Parksville.
Friday August 15:
A Barred Owl and Steller's Jays were seen in a yard along Benson View Road above the Jingle Pot area of Nanaimo.
Steller's Jays are visiting feeders along Cloke Road in Ladysmith.
Thursday August 14:
Two female Harlequin Ducks were seen at Clark Bay on Gabriola Island.
Two Purple Martins were spotted at Buckley Bay near the Ferry Terminal.
Wednesday August 13:
Three Heermanns' Gulls and a Ring-billed Gull were seen in with the California and Glaucous-winged Gulls at Columbia Beach.
A small flock of Purple Martins were singing and dancing in the sky above the 100 block of Meridian Way in Parksville.
Tuesday August 12:
Five Least Sandpipers, eight Western Sandpipers, one Lesser Yellowlegs and four Greater Yellowlegs were seen at French Creek.
Two Black Oystercatchers, several California Gulls and many Glaucous-winged Gulls were seen on a gravel bar at Columbia Beach.
Monday August 11:
Sixteen Common Nighthawks were seen flying southwest over Sooke at sunset.
Four Wilson's Warblers were spotted frolicking about on lily pads on a pond along Lancewood Avenue in Lantzville.