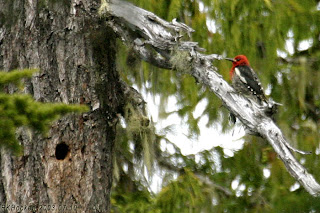 Eighteen California Quail were counted in a yard in the 2100 block of Wren Place in Nanaimo.
Friday, August 01:
A Black Swift was seen flying low over the sand traps and along the fairway, at Morningstar Golf Course off Lee Street and close to Morningstar Drive next to the pond. Cliff Swallows, Barn Swallows, a few Violet-green Swallows and a couple of Rough-winged Swallows were seen hawking insects over the pond.
On the water were one Canada Geese, Mallards, Wood Ducks and one Northern Shoveller. On the far side of the pond along the shore a juvenile Spotted Sandpiper was bobbing continually as it walked along the shore.
Two orange-crowned Warblers, six Cedar Waxwings and a young Western Tanager was seen in the bushes along the pond.
A Spotted Sandpiper was seen off Johnstone Road at French Creek along the ocean. Along the tide line were Black-bellied Plovers, eight Western and Least Sandpipers,, a Bonaparte's Gull and Glaucous-winged Gulls.
Four Anna's Hummingbirds and three Northern Flickers were visiting feeders along Lancashire Avenue in Nanaimo.
Several Black Swifts were seen near Hammond Bay Road and Rutherford Road in Nanaimo.
Eight Common Nighthawks, eighteen Violet-green Swallows, twenty-four Brewer's Blackbirds and thirteen American Robins were seen at Sooke.

Wednesday July 30:
A Steller's Jay was seen in the 3200 block of Uplands Drive in Nanaimo.
A Red Breasted Sapsucker was seen at the corner of Cavan Street and Victoria Crescent in downtown Nanaimo.

Tuesday July 29:
A Rufous Hummingbird was observed chasing a Merlin at Fairwinds in Nanoose Bay.
Five Steller's jays and a male Anna's Hummingbird were seen in a yard along Dawkins Lane in Nanaimo.