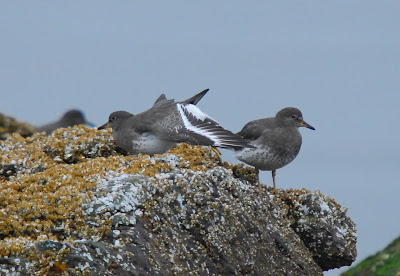 A Hairy Woodpecker was spotted at Milner Gardens in Qualicum Beach.

Two Anna's Hummingbirds are visiting a backyard along Dunsmuir Crescent in Ladysmith.

Thursday September 30:
A female Anna's Hummingbird was seen along Morrell Circle in Nanaimo.

A Cackling Goose was seen at the Morningstar ponds in French Creek.

Monday September 27:
Twenty-one California Quail were seen in a back garden in the 2100 Wren Place in Nanaimo.

Red-breasted Nuthatches, Chestnut-backed Chickadees, Steller's Jay, Dark-eyed Juncos and House Finches are at feeders in the 2300 Block of Marlborough Drive in Nanaimo.

Thursday September 23:
Four Sandhill Cranes were spotted on a farm in Nanoose Bay.