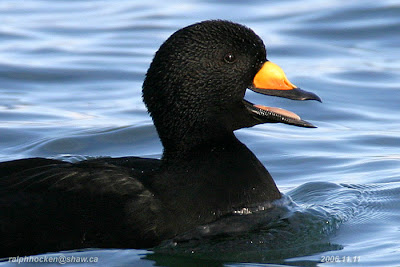 The Tuesday bird walk went to the Little Qualicum River Estuary north of Qualicum Beach. Light showers, but calm winds and calm seas were with us throughout the morning. The highlights included seeing a Black-bellied Plover, Black Oystercatchers, Black Turnstones and
Dunlin from the viewing platform in Qualicum Beach. A large flock of Bushtits swarmed the Rose Bushes at the Estuary. Rafts of Greater Scaup, Harlequin Ducks, Surf Scoters, White-winged Scoters, over 300 Black Scoters, Bufflehead, Common Goldeneye were just off shore. Further offshore there were thousands upon thousands of Pacific Loons, Common Loons, Common Murre, Pigeon Guillemot and Marbled Murrelet in a huge raft as far as we could see in the scope.