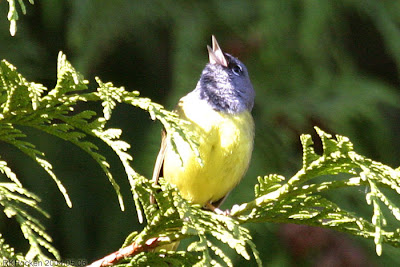 The Tuesday bird walk went Lot Ten along the Little Qualicum River in Qualicum
Beach. The morning started out cloudy and cool, but finished sunny and warm. We
spotted a Chipping Sparrow carrying nesting material at the start of the walk.
We heard a MacGillivray's Warbler and then saw him singing on a tall bush near
the trail. A partial albino Brown-headed Cowbird, with a large white collar and
white spots on its head, was perched high at the top of a conifer tree. A
Warbling Vireo gathering nesting material gave us great views when he put in an
appearance just above us along the trail. Two Spotted Sandpipers flew into the
edge of the river for us to view. We watched as a family of four or five
Red-breasted Sapsuckers flew back and forth over the river for about fifteen
minutes. We caught a glimpse of a Wilson's and a Yellow Warbler in the willow
bushes near the river.