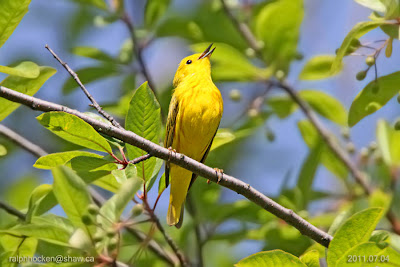 Please remember, when reporting a sighting to leave your name and phone number
along with the date, the species and location of your sighting.

Sunday July 24, 2011:
The Sunday bird walk went to the Ladysmith Maritime Society Marina in Ladysmith.
The morning was sunny and hot. We saw over sixty Purple Martin nests and over
three hundred Purple Martins flying and perched along the marina. We got good
views of a Orange-crowned Warbler feeding a Brown-headed Cowbird and good looks
at a Yellow Warbler.

Saturday July 23:
A Northern Harrier was seen along Rivers Edge in Parksville.

Five Caspian Terns were seen flying along shore line and resting on a bar at the
beach access at Little Qualicum River Estuary in Qualicum Beach.

A Red-eyed Vireo was heard singing in a Lot Ten along the Little Qualicum River
in Qualicum Beach.

A Common Nighthawk was spotted over the Eaglecrest area of Qualicum Beach.

One adult and two Barred Owl chicks and one Common Nighthawk were seen at
Colliery Dam Park in Nanaimo.

A Red-eyed Vireo was heard singing at Lot Ten along the Little Qualicum River
in Qualicum Beach.

Thursday July 21:
A Dark-eyed Junco was spotted on a nest at Colliery Dam Park in Nanaimo.

A female Northern Flicker was feeding three young flickers in an apple tree in a
backyard in upper Lantzville.

A large family of California Quail were seen feeding in a backyard in upper
Lantzville.

The early birders are heading out tomorrow at 7:30 a.m. We will meet at the usual meeting spot at the Parksville Bay near the Lions playground at 7:30 am or at our usual spot at Shelly Road side of the Englishman River at about 7:35 a.m.

"Pelagic birding trip in September"
WildResearch, a Vancouver base non-profit, is pleased to be offering a pelagic
birding trip departing from Ucluelet on the Sunday the 18th September 2011. The
ship we will be using is the M.V. Frances Barkley, a 39m (128ft), 300 ton
coastal freighter. The cost per person is $200 for WildResearch members.