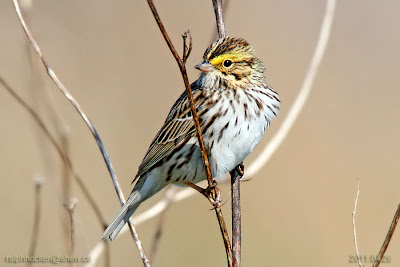 Wednesday July 27:
A Barred Owl was seen at Bowen Park in Nanaimo.

A Great Horned Owl chick was seen in Colliery Dam Park in the cedar grove above the rock cliff near the Upper Lake in Nanaimo. This chick has been seen from July 23 until July 27 at the same location.

Monday July 25:
The early birders went to the Shelly Road side of the Englishman River in Parksville. The morning was sunny and warm. We saw many Savannah Sparrows and Willow Flycatchers in the meadows. A female Northern Harrier flew over the meadows and then perched in a conifer tree for a long time. We spotted a pair of American Kestrels in the top of a tall conifer tree and the female Kestrel flew over just above us giving us great views. We spotted a Red-breasted Merganser, three Black-bellied Plovers, two Black Oystercatchers, three Caspian Terns, Mew Gulls and Glaucous-winged Gulls near the tide line.

A pair of American Goldfinch were seen feeding at backyard feeders along Overlook Drive in Nanaimo.

Saturday July 23:
A Northern Harrier was seen along Rivers Edge in Parksville.

Five Caspian Terns were seen flying along shore line and resting on a bar at the beach access at Little Qualicum River Estuary in Qualicum Beach.

A Red-eyed Vireo was heard singing in a Lot Ten along the Little Qualicum River in Qualicum Beach.

A Common Nighthawk was spotted over the Eaglecrest area of Qualicum Beach.

A possible female Yellow Grosbeak was seen along Jensen Avenue West in Parksville at a third floor balcony feeder for about ten minutes on Friday July 22 at 12:30 pm. The birder made notes of the large black beak and the very unusual streaking on top of the head and throughout the back and also there were white patches on the wings.

The Yellow Grosbeak has a large range reaching up to roughly 300,000 square kilometers. This bird is normally found in Guatemala, Mexico and the United States.

An American Bittern was seen at Buttertubs Marsh in Nanaimo.