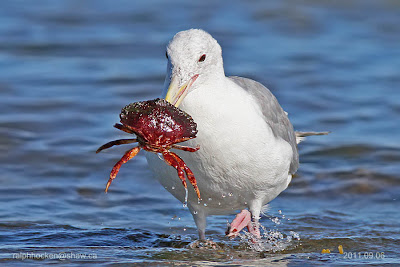 Sunday October 30, 2011:
The Sunday bird walk went to Buttertubs Marsh in Nanaimo. The morning was cloudy with calm winds.
The highlights included seeing a Eurasian Wigeon in with American Coots when we first arrived at the marsh. Six Gadwall were seen swimming with American Widgeon. Five Trumpeter Swans flew over head. A Northern Shrike flew low over us and landed on the top of tree just off the trail giving us great views. The big surprise of the morning was the sighting of Ruddy Duck on the water as we neared the end of the walk.

Friday October 28:
Over 150 Pine Siskins are visiting feeders along Lancashire Avenue in Nanaimo.

Tuesday: October 25:
The Tuesday bird walk went to Columbia Beach. The morning was clear and cool with calm winds. Two Trumpeter Swans flew high overhead to start the morning off. We saw Surf Scoters, White-winged Scoters, Black Scoters and our first sighting of the season of a Long-tailed Duck. There were Pacific Loons in breeding plumage, a large number of Horned Grebes and Red-necked Grebes. One lone Western Grebe was not far off shore. Further off shore we saw a long line covering miles of an estimated 1.5 million gulls that including Bonaparte's Gulls, Mew Gulls, Ring-billed Gulls, California Gulls, Thayer's Gulls and Glaucous-winged Gulls. They were in a hugh feeding frenzie--an awesome sight through the scopes as the sun shone down on them. Near the Pebble Beach gravel bar, close to shore, three Sea Lions put on a spectacular show as they fed on salmon.