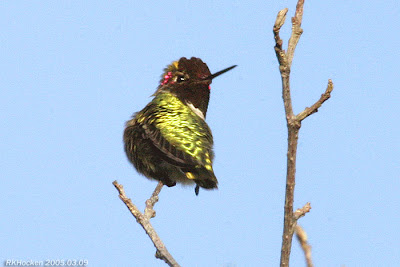 Saturday December 10:
A Cassin’s Vireo was seen at a pond in a backyard along Ventura Drive in Nanaimo.

Friday December 09:
Evening Grosbeaks were seen visiting feeders in a backyard along Doumont Road in Nanaimo.

Two Barred Owls were seen in a backyard in the Hospital area of Nanaimo.

White-Throated Sparrows and Townsend’s Warblers are visiting a backyard along Granite Park Road in Nanaimo.

Thursday December 08:
A Northern Saw-Whet Owl was seen at the corner of Little Ford Road and Fairview Drive in Nanaimo.

Tuesday December 06:
The Tuesday bird walk went to Rathtrevor Provincial Park in Parksville. The morning was cloudy with fog over the calm water on the Strait of Georgia.
The highlights included seeing a large mixed flock of Black-bellied Plovers, Black Turnstones and Dunlin on a gravel bar just off shore. We spotted one Common Murre further offshore. Five Trumpeter Swans flew low over the water. The find of the morning was the sighting of a Townsend's Solitaire high up in a conifer tree.

“North to the South Pole”
December 14th marks the centennial of Roald Amundsen’s arrival at Earth’s South Geographic Pole, man’s first ‘undisputed’ attainment of either pole.
To mark this incredible achievement, Bill Merilees, (former field biologist with the Australian Antarctic Research Program and Antarctic cruise ship lecturer) will chronicle this remarkable story with a slide illustrated lecture. Some of the illustrations to be used come from Amundsen’s expedition.
December 14th, 2011 – 7:00 p.m. at Beban Park

“NANAIMO CHRISTMAS BIRD COUNT”
Will be held on Wednesday December 28th, 2011.
Organizers are looking for as many backyard feeders counter and field observers as possible.
Contact the Birdstore at 250-390--3669 or email us at: thebackyard@shaw.ca

which is good since finding ten of the same piece would be difficult anyway. The more ornate the glass, the more romantic the centerpieces should be, while simpler pieces like the milk glass work well with virtually any flowers. When sourcing vintage glass for your bird cage centerpieces, choose pieces which you really love so that you can use them in your home after the wedding.