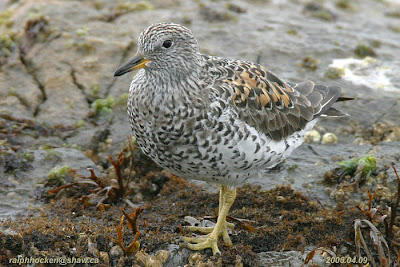 To report your sightings phone the Store at 250-390-3669 or e-mail us at thebackyard@shaw.ca
Sunday March 18: 2012:
The Sunday bird walk went to Neck Point Park in Nanaimo. The morning started out cloudy and cool but ended being sunny and warm. The highlights included seeing a raft of thirty Barrow’s Goldeneye at the start of the walk. Over three hundred Surfbirds and fifty Black Turnstones were feeding on Herring eggs at the Point and moved along the shore until Sunset Beach. The Spotted Sandpiper was seen along the Beach at it’s usual spot.

Eight Western Meadowlarks, two Northern Harriers and a Tree Swallow were seen and heard at the Nanaimo River Estuary in south Nanaimo.

Friday, March 16:
Three Turkey Vultures were seen soaring over Craig Street and Meridian Way in Parksville.
One Turkey Vulture was seen soaring over McVickers Street and Standford Avenue in Parksville.
Thursday March 15:
Black Turnstones and a flock of Surfbirds were seen at Neck Point Park in Nanaimo.
Over twenty Bald Eagles were seen at Neck Point Park and Piper’s Lagoon in Nanaimo.
Tuesday, March 13:
The Tuesday bird walk went to Columbia Beach, French Creek and Morningstar Ponds. The morning was sunny and warm which made for a great morning of birding. A flock of Greater White-fronted Geese flew past high over head. Thousands of Gulls were in a Hugh raft on the Strait of Georgia. Large numbers of Brant Geese flew in with the Gulls throughout the morning. Black-bellied Plovers, Black Oystercatcher, Black Turnstone and Dunlin were roosting on the point at French Creek. We spotted a Yellow-rumped Warbler fly catching on the Alder Trees at the Morningstar Ponds.


Monday March 12:
A Northern Shrike was spotted along Beaconsfield Road, off Howard Avenue in Nanaimo.
Sunday March 11:
A Turkey Vulture was seen high above Nanoose Bay.

A Eurasian-collared Dove was seen along Lynburn Crescent in Nanaimo.

Why are feathers important to understanding birds? Why do some remain close to home year‐round and others migrate for thousands of kilometers? Answers to these questions are an integral part of Our Feathered Friends, a travelling exhibition from Ottawa’s Canadian Museum of Nature. The exhibition ‘takes flight’ at the Nanaimo Museum, from February 3 to May 21, 2012 and is suitable for all ages.
The exhibition’s display units and graphics provide an introduction to birds and birdwatching. “Visitors’ skill when identifying local birds will be enhanced via the exceptional photography of Ralph Hocken and study specimens loaned from VIU’s Museum of Natural History, “said curator David Hill‐Turner. “Novice birders will find the exhibition and programs very helpful in learning more about the hobby”.
Public Programs offered as part of the exhibition will appeal to various birding interests. They include: a photography contest, Urban Bird tours, birding and nature photography presentations and ecology programs for Elementary School students. (Visit our website for full details, www.nanaimomuseum.ca or contact Aimee Greenaway at 250.753.1821)
Come along to the workshops and demonstrations, try your hand at the oriental art of Origami and even learn to prepare a meal for your favourite backyard bird. Using photos, specimens and video, learn what makes birds special, how they soar and glide and how to identify them. More than 400 species of birds have been identified in BC, more than any other province in Canada.
Whether you are an indoor or outdoor birdwatcher you will find something of interest in this traveling exhibit, Our Feathered Friends at Nanaimo Museum. This exhibition is sponsored by THE BACKYARD Wildbird and Nature Store.