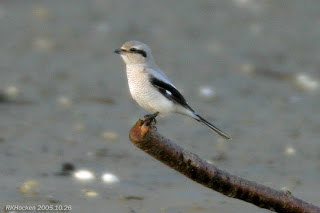 The Tuesday bird walk went to the Plummer Road side of the Englishman River Estuary in Parksville. The morning was cloudy and cool but as the morning progressed it became sunny and warm. The highlights included seeing hundreds of American Robins with some Varied Thrush throughout the morning. Over twenty-five Killdeer were on the mudflats along with a Baird’s Sandpiper and one Western Sandpiper. One lone Greater White-fronted Goose flew overhead and disappeared heading south. We spotted an Eurasian Widgeon in with a flock of American Widgeon. A Northern Harrier flew low over the estuary hunting for prey. We spotted a Northern Shrike perched high on top of a Conifer Tree next to the road. Bonaparte's Gulls, Mew Gulls, California Gulls, Thayer’s Gulls and Glaucous-winged Gulls were on the gravel bar just off shore on the Strait of Georgia. We spotted an adult nonbreeding Pigeon Guillemot along with several Pacific Loons and a raft of Harlequin Ducks and Surf Scoters on the Strait.
Eighteen birders saw and heard the following sixty-two species:
Canada Goose
Greater White-fronted Goose
American Widgeon
Eurasian Widgeon
Mallard
Northern Pintail
Green-winged Teal