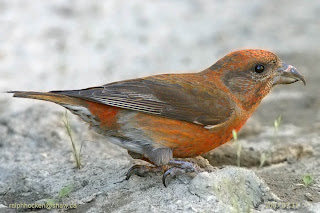 Saturday February 02:
A Palm Warbler and a Western Meadowlark were seen at the Nanaimo River Estuary in south Nanaimo.

Tuesday, January 29:
The Tuesday bird walk went to the Little Qualicum River Estuary in Qualicum Beach. The morning was cloudy but quite warm. The highlights included seeing five Long-tailed Ducks, hundreds of Red-necked Grebes and many Horned Grebes off shore from the viewing platform off Highway 19A. A large flock of Black Scoters were seen not far from shore at the estuary.  Further off shore were thousands of Common Murre on the water.

“ Rare Bird Alert Arctic Loon”----- We found an Arctic Loon feeding near the far shore at the mouth of the Little Qualicum River. We watched the Loon for thirty minutes (11:20 until 11:50 a.m.) through our scopes. The adult, non-breeding Loon displayed a dark nape with white cheeks, and extensive bright white tuft along its flank. The Arctic Loon was smaller than the Common Loon that swam near it. We used The Sibley Guide to Birds, page 24, first edition, published October 2000 to confirm the identification of the Arctic Loon.