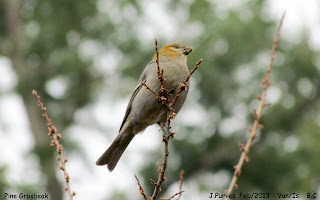 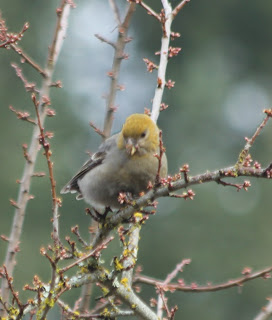 
The Tuesday bird walk went to Rathtrevor Provincial Park in Parksville. The morning was cloudy with a few light showers throughout the morning. A large mixed flock of Black-bellied Plovers, Black Turnstones, Dunlin and two Black Oystercatchers greeted us at the tide line as the birdwalk began . The large flock lifted several times giving us great views as the huge cloud of shorebirds danced over the water. The big surprise of the morning was the sighting of a Northern Goshawk that passed overhead and then disappeared into the forest. Flock after flock of Common Murre flew down the Strait of Georgia just above the water for most of the morning. Four Pine Grosbeaks were spotted feeding on the buds on an apple tree not far from the trail near the old homestead.
Fifteen birders including visiting birders from Alberta saw and heard the following thirty-five species:
Canada Goose
Mallard
Northern Pintail
Harlequin Duck
Surf Scoter
White-winged Scoter
Long-tailed Duck
Bufflehead
Common Goldeneye
Red-breasted Merganser
Pacific Loon
Common Loon
Horned Grebe
Double-crested Cormorant
Pelagic Cormorant
Bald Eagle
Northern Goshawk
Black-bellied Plover
Black Turnstone
Dunlin
Black Oystercatcher
Mew Gull
Thayer's Gull
Glaucous-winged Gull
Northwestern Crow
Common Raven
Pacific Wren
American Robin
European Starling
Chestnut-backed Chickadee
Spotted Towhee
Pine Grosbeak
Song Sparrow
Dark-eyed Junco
Pine Grosbeak
The next Tuesday bird walk on February 19, 2013 will be going to Port Alberni.
We will meet at Parksville Bay at the Lion's Playground parking area in Parksville at 8:00 a.m. and drive up to Port Alberni.
Sandy will meet us at Victoria Quay in Port Alberni at 9:00 a.m.
Good birding
Neil Robins
Parksville
British Columbia