The Tuesday bird walk went to Lot Ten in Qualicum Beach with a quick stop at the viewing platform. The morning was mostly sunny with clouds.  We had a shower to end the morning. We spotted a Common Tern flying low over the water, two Marbled Murrelets and two Pigeon Guillemots from the viewing tower.  A flock of Black Swifts greeted us at Lot Ten along with a Black-throated Gray Warbler singing from the top of a tall Cedar Tree.  A Western Tanager entertained us from a tall snag. We heard a number of American Robins mobbing a predator and we discovered a Barred Owl perched next to the trunk of a Cedar Tree.  A pair of Spotted Sandpipers put on a show for us as they fed and chased one another along the edge of the river. 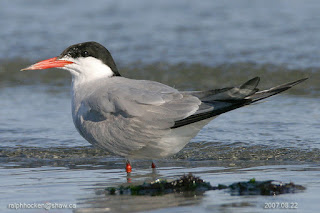 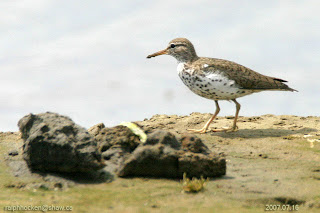