The Tuesday bird walk went to the Moorecroft Regional Park in Nanoose Bay. The morning was mostly cloudy with a few sunny periods. We were entertained by watching all of the many Anna’s and Rufous Hummingbirds at the feeders near the caretaker’s house.  A pair of Downy Woodpeckers were feeding at the suet feeders there.  A Pileated Woodpecker led us through the first part of the walk, first by chopping on a stump and then leading us for a long distance along the trail, feeding on the ground.  Our scopes gave us great views of a Townsend's Warbler singing at the top of a very tall conifer tree. We saw a lone Marbled Murrelet on the Strait of Georgia riding the waves. We spotted a Varied Thrush feeding in the grass at the meadow.  A Black-throated Gray Warbler, a Cedar Waxwing, a Red-winged Blackbird and a Yellow-rumped Warbler appeared at the marsh to put on a display for us. 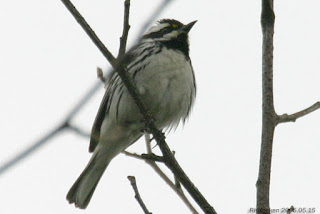 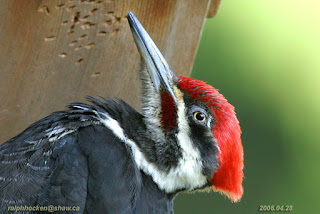