Sunday, June 05, 2016:
The Sunday bird walk went to Morden Colliery Historic Park in south in Nanaimo. The morning was sunny and hot but it was much cooler in the forest. We heard and then saw a Swainson's Thrush perched close to the trail giving us great views. We watched as three Red-breasted Sapsuckers went in and out of their nest hole in a snag near the bridge.  We spotted a total of five Barred Owls during the morning.  We were entertained for about thirty minutes as an adult Barred Owl with a snake in its talons flew over to two young fledglings and gave the snake to one of the youngsters. 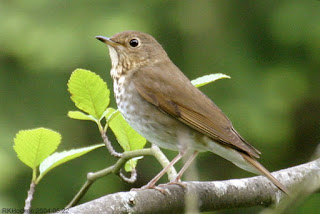 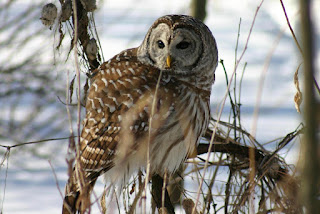 
An Olive-sided Flycatcher was calling from the marsh above Colbourne Drive in Nanaimo.


Tuesday, May 30:
The Tuesday bird walk went to the Englishman River Shelly Road side. The morning was sunny and warm with a breeze off the Strait.  The forest brought us a bit of relief from the sun. Bewick’s Wrens were perched high up in trees singing and entertaining us throughout the morning. Yellow Warblers were singing near the trail for all of us to hear and see. A murder of Northwestern Crows was spotted chasing a Sharp-shinned Hawk overhead until the Hawk flew out of sight. There were two Willow Flycatchers singing near the trail.  One Northern Shoveler and a pair of Northern Pintail were swimming near the tide line. Two Belted Kingfishers flew noisily over head. 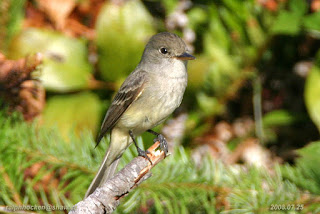 
Monday, May 30:
Western Tanager was seen at the Hazelwood Herb Farm in south Nanaimo.


American Goldfinches, a Black-headed Grosbeak, a White-crowned Sparrow and a Eurasian Collared Dove were seen in a yard along Foxtail Avenue in Nanaimo.