Parksville/Qualicum Beach, Tuesday bird walk, February 27, 2018:
The Tuesday bird walk went to the Little Qualicum River Estuary in north Qualicum Beach.  The morning was cloudy with a strong wind off the Strait of Georgia. One Black-bellied Plover and five Black Oystercatchers were seen along the shore at the Brant Viewing Platform off Highway 19A. Long-tailed Ducks,  Red-necked Grebes, Horned Grebes, Common Loons and Pacific Loons were seen further off shore. Six Orca’s ( Killer Whales) were seen far off shore and entertained us for a long time. A mixed flock of Surf Scoters, White-winged Scoters and Black Scoters were spotted just past the gravel bar at the estuary.  Large numbers of Northern Pintail, Greater Scaup were seen just off shore.  A Herring Gull and a Western Gull were perched in with a huge mixed flock of Gulls. 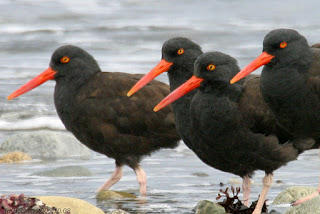 
The Tuesday Bird Walk on March 06, 2018 will be going to the Plummer Road side of the Englishman River. Meet at the Parksville Community Park (near the Lions Club playground parking lot) in Parksville at 9:00 am, or at the corner of Plummer Road and Shorewood Drive on the ocean side of Highway 19A at about 9:10 am.
Good birding
Neil Robins
THE BACKYARD WILDBIRD & NATURE STORE
314 Metral Drive
Nanaimo B.C.
V9T-2L8
Phone: 250-390-3669
Fax: 250-390-1633
Email: thebackyard@shaw.ca