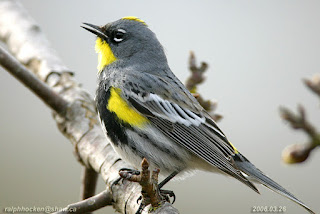 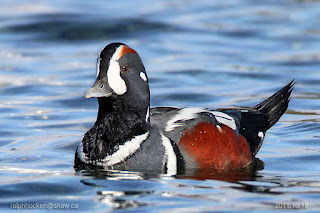 
Parksville/Qualicum Beach, Tuesday bird walk, March 06, 2018:
The Tuesday bird walk went to the Plummer Road side of the Englishman River Estuary in Parksville.  The morning was cloudy with a calm wind off the Strait of Georgia—the feel of spring is in the air!  A Northern Shrike watched us from a short tree.  Three Gadwall were seen along the river.  The Strait of Georgia was covered with millions of birds! The herring spawn was in full force with thousands and thousands of Mew Gulls, Iceland Gulls, California Gulls and Glaucous-winged Gulls on the gravel bars in the estuary and on the Strait.  A Bald Eagle flew over the gulls and they  lifted and covered the sky in flight. Many flocks of Brant Geese flew down the Strait during the walk.  Very large rafts of Surf Scoters, White-winged Scoters, Greater Scaup and Lesser Scaup stretched for a long distance from the estuary into the Strait.  An Eurasian Wigeon was spotted in with a small flock of American Wigeon just off shore.  Five Orcas (Killer Whales) put on a great show us for a very long time. It was a whale of a bird walk!  A huge flock of Common Redpolls flew overhead at the end of the walk and landed in a tree giving us great views. 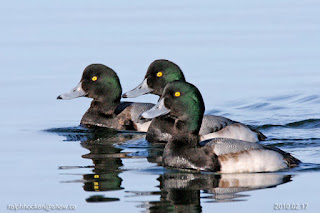 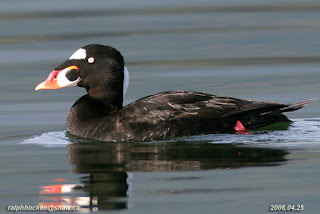 Please Note
Check this site (www.thebirdstore.blogspot.com)early Tuesday and Sunday on stormy mornings to see if the walks have been cancelled!

Please Note
Check this site (www.thebirdstore.blogspot.com)early Tuesday and Sunday on stormy mornings to see if the walks have been cancelled!


The Tuesday Bird Walk on March 13, 2018 will be going to Rathtrevor Beach Provincial park in Parksville.. Meet at the Parksville Community Park (near the Lions Club playground parking lot) in Parksville at 9:00 am, or at the main parking lot at Rathtrevor Park about 9:10 am.


The Sunday Bird Walk on Marsh 18, 2018 will be going to the Englishman River Shelly Road side in Parksville. Meet at the Birdstore at 9:00 AM. Or the end of Shelly Road on the ocean side of highway 19a in Parksville at about 9:25 AM.