The Tuesday bird walk went to the Rathtrevor Beach Provincial Park in Parksville.  The morning was cloudy with a calm wind off the Strait of Georgia.  Light rain started just as we were finishing the walk.  Over three hundred Dunlin, several  Black-bellied Plovers and one Sanderling were seen feeding along the shoreline.  Hundreds of Mew Gulls,  California Gulls, Iceland(Thayer's) Gulls and Glaucous-winged Gulls noisily filled the shore all morning.  A very large raft of thousands of Brant, Greater Scaup, Lesser Scaup, Surf Scoters, White-winged Scoters, Black Scoters and  Long-tailed Ducks were  seen further offshore. Pacific Loons and Common Loons were spotted even further offshore. As we were doing the tally at the end of the walk a Northern Harrier did a fly pass! 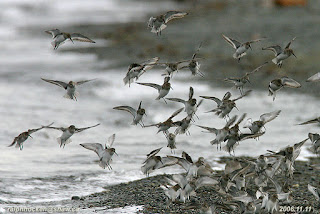 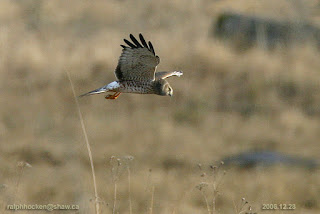 
Please Note
Check this site (www.thebirdstore.blogspot.com) early Tuesday and Sunday on stormy mornings to see if the walks have been cancelled!
The Tuesday Bird Walk on March 20, 2018 will be going to the Little Qualicum River Fish Hatchery.  Meet at the Parksville Community Park (near the Lions Club playground parking lot) in Parksville at 9:00 am, or at the Brant viewing platform in north Qualicum Beach at about 9:20 am.
Good birding
Neil Robins
THE BACKYARD WILDBIRD & NATURE STORE
314 Metral Drive
Nanaimo B.C.
V9T-2L8
Phone: 250-390-3669
Fax: 250-390-1633
Email: thebackyard@shaw.ca
Blog: www.thebirdstore.blogspot.com