The Tuesday bird walk went to the Shelly Road side of the Englishman River Estuary in Parksville. The morning was sunny and warm with calm winds from the Georgia Strait. Two Northern Flickers were seen high up in a tall tree off the trail. An Orange-crowned Warbler was feeding high up in a tree near the trail. We heard and then saw a Fox Sparrow singing in a bush along the trail. Two Cooper’s Hawks flew overhead giving us great views. We saw a Barred Owl perched on a tree not far from us. The owl spent a long time looking down on us.  A Western Meadowlark was seen on the meadows.  Many flocks of Bonaparte's Gulls were flying in single file, just above the water heading up the Strait. 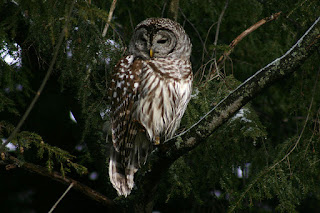 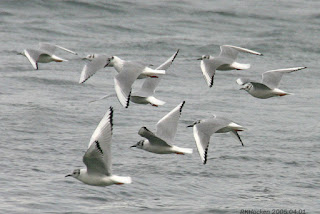 
The Tuesday Bird Walk on October 23, 2018 will be going to the Columbia Beach in French Creek. Meet at the Parksville Community Park (near the Lions Club playground parking lot) in Parksville at 9:00 am, or at the parking area along Tryon Bld. (Turn onto Columbia Drive on oceanside of Highway19a.  Go to the tee intersection on Columbia Drive and turn right onto Admiral Tryon Bld. Go about one hundred yards to the parking area on the ocean) at about 9:20 am.