Parksville/Qualicum Beach Tuesday bird walk, November 06, 2018
The Tuesday bird walk went to the Little Qualicum River Estuary.
The morning was cloudy with calm winds on the Strait of Georgia. Twenty-nine  Snow Geese were seen in the fields at the Parksville Community Park before the walk started. We were entertained by five Humpback Whales as they were feeding and diving in the strait for about thirty minutes. It was a great viewing for us all. About one hundred yards down the Strait of Georgia from the Whales we saw about ten White-sided Dolphins also feeding and diving, both sightings a highlight of the morning! For most of the morning we saw Bonaparte's Gulls streaming in single file heading up the Strait. Several Bufflehead and Common Goldeneye were on the Strait. Four Long -billed Dowitchers were seen feeding on the Estuary. A Cooper’s Hawk flew over head, going into the forest. Many Bald Eagles were perched along the shoreline and high up in the tall trees. A large flock of Pine Siskins flew into a tall tree. 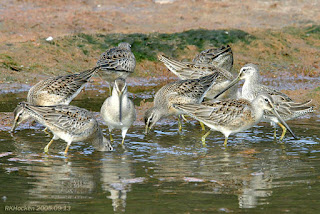 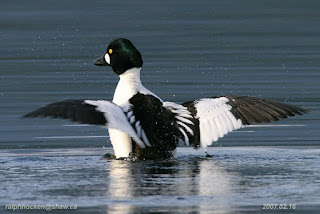 
The Tuesday Bird Walk on November 18, 2018 will be going to Buttertubs Park in Nanaimo. Meet at the Backyard Wildbird and Nature Store, 6314 Metral Drive in Nanaimo at 9:00 am or at Buttertubs Marsh at the Bowen Road side of Buttertubs at about 9:15 am.
Good birding
Neil Robins