Parksville/Qualicum Beach Tuesday Bird Walk, April 23, 2019:
The Tuesday Bird Walk went to Moorecroft Regional Park in Nanoose Bay.  The morning was mostly sunny with calm winds.  A Townsend’s Warbler was spotted at the start of the walk.   A Red-breasted Sapsucker was seen just off the trail.  A Hammond’s Flycatcher was heard  several times during the walk. A Pacific-slope Flycatcher, several Orange-crowned Warblers, a large number of Yellow-rumped Warblers, two Townsend’s Warblers and a Black-throated Gray Warbler were seen high up in the tall trees near the trail.  Summer is on it’s way! 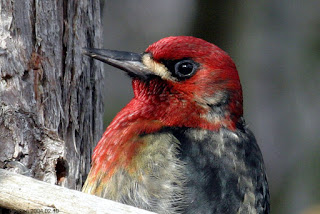 
The Tuesday Bird Walk on April 30, 2019 will be going to the Plummer Road side of the Englishman River in Parksville.  Meet at the Parksville Community Park (near the Lions Club playground parking area) in Parksville at 9:00 am, or at the corner of Plummer Road and Shorewood Drive at  about 9:10 am.