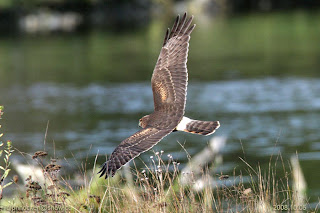 Friday October 10:
A hugh flock of Northwestern Crows, thirty birds wide and streaming past for fifteen minutes heading towards Nanoose Bay, was seen from the top Groveland Drive and Dickson Road in north Nanaimo, at about 6:00 P.M.
Over fifty Greater White-fronted Geese were seen on a newly plowed and seeded field on the Brannen Lake side of Doumont Road in north Nanaimo.
A Snow Goose was seen in with the Canada Geese on the grass at Parksville Beach Community Park.


Thursday October 09:
A Townsend's Warbler was spotted in the 200 block of Dawkins Lane in Nanaimo.
A Greater White-fronted Goose in with a flock of Canada Geese at the Parksville Bay Community Park.

Monday October 06:
A Northern Harrier and a flock of Greater White-fronted Geese were seen flying over the Englishman River Estuary, Plummer Road side.
A Great Horned Owl and a Fox Sparrow were seen alone Morrell Circle in Nanaimo.

Sunday October 05:
An Anna's Hummingbird is visiting feeders in the 700 block of Doehle Avenue in Parksville.