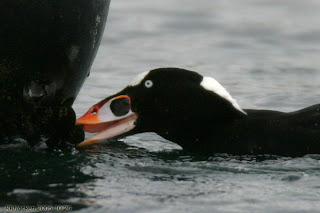 Seventeen birders saw and heard thirty-nine species of birds during a beautiful sunny fall morning.
Among the highlights of the morning were the sightings of one Long-tailed Duck, a large raft of Surf Scoters and White-wing Scoters and several Black Scoters who entertained us with their singing throughout the morning. We spotted a Merlin chasing some song birds and a Cooper's Hawk put in a brief appearance. Several Pacific Loons, still in breeding plumage, with gorgeous silver necks and heads, were bobbing in the water. Four Dunlin, two Black-bellied Plovers, several Black Oystercatchers and a Killdeer were seen near the gravel bar. Large flocks of Harlequin Ducks flew past us and landed on the water within our viewing range.