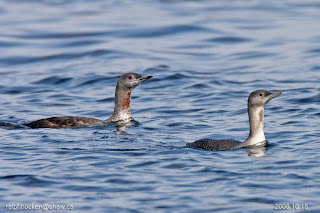 Saturday November 01:
A Rusty Blackbird was spotted at Whiffin Spit in Sooke.

Thursday October 30:
A Barred Owl was seen in the 6200 block of Forest Crescent in Nanaimo.

A Cassin's Finch was seen visiting feeders across from the Civic Center in Port Hardy.

An Anna's Hummingbird was seen visiting feeders in the Springbrook area of Campbell River.