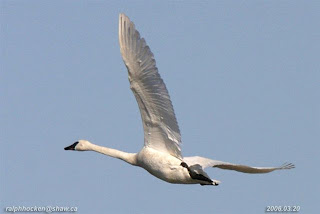 Wednesday November 05:
A Eurasian Wigeon was seen at the French Creek Estuary.
Twenty Trumpeter Swans were seen at Nanaimo River Estuary in south Nanaimo.
Fifteen Evening Grosbeak's were observed at feeders near Boat Harbour in Cedar.
A Northern Shrike was spotted near the golf driving range in Duncan.

Tuesday November 04:
The Tuesday Bird Walk went to the Englishman River Estuary, Plummer Road side in Parksville.
Sixteen birders saw and heard forty species of birds during a blustery fall morning.
The highlight of the morning was the Sea Lions, who stole the show from the birds. A pair of Sea Lions came to the surface with Chum Salmon in their mouths, thrashing about and eventually swallowing the salmon. Not far from shore, several immature Gulls, a large flock of Common Mergansers and a few Harlequin Ducks were competing for the scraps of Salmon that were left behind from the huge Sea Lions.
The tide was up and heavy waves pounded the shore. Between the waves we saw eight Black Turnstones and one Dunlin racing towards the estuary. Further out on the Strait,there were several Pacific Loons flying just above the water. A Common Loon, a Horned Grebe and a Western Grebe gave us quick glances between waves.
Along the boardwalk, we saw a large flock of Bushtits and Golden-crowned Kinglets fly quickly in the bushes and then disappear. A pair of Bald Eagles were perched high in a Fir Tree off the trail.
A Ring-necked Duck and six Hooded Mergangers were seen at the French Creek pond.

Sunday November 02:
A Peregrine Falcon and a Merlin were seen in a yard in the 200 block of Ravere Place in Nanaimo.
Ten Black Oystercatchers were seen on the South-east shore of Protection Island.
Four Greater White-fronted Geese have spent the last month on a farm in the 6900 block of Eyelash Drive near Brannen Lake in Nanaimo.

Friday October 31:
A female Ring-necked Pheasant was spotted in a Herb Garden in Deep Bay.