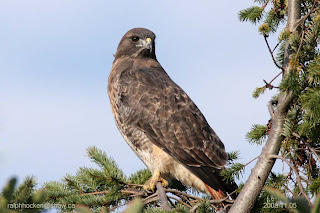 The Tuesday Bird Walk went to the Shelly Road side of the Englishman River Estuary in Parksville.

Highlights of the morning that caught our attention included a large flock of feisty Dark-eyed Juncos flitting in and out of the small bushes just after we started the walk. A Peregrine Falcon was perched in his usual spot high up in a Fir Tree on the northwest trail of the estuary. A mixed flock of Song Sparrows, a Lincoln's Sparrow and several Golden-crowned Sparrows kept us entertained on the path and in the small bushes just off the trail. We saw three pairs of Eurasian Wigeon close to shore in the estuary. Further out on the ocean there were large flocks of Harlequin Ducks, Surf Scoters, White-winged Scoters, Black Scoters, Buffleheads and a lone Pacific Loon bobbing on the choppy seas. On the way out of the estuary we came upon a flock of Golden-crowned Kinglets displaying their Golden crowns.


The Backyard Wildbird & Nature Store's weekly bird walk in the Parksville/Qualicum Beach area is on Tuesday mornings at 9 a.m. Participants meet at the at the Parksville Beach Community Park, at the parking area in front of the playground at 9 a.m. Rain and/or heavy winds will deter us--but we will plan a walk for every week. Everyone is welcome to bring their binoculars and join us for a morning of birding. For the weekly location of the birdwalk, please call Neil Robins at 250-954-1928 or The Backyard Wildbird & Nature Store at 1-888-249-4145.