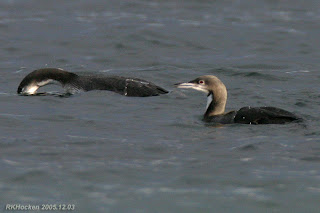 The Tuesday Bird Walk went to the Englishman River Estuary, Plummer Road side in Parksville.

The highlight of the morning was the Sea Lions, who stole the show from the birds. A pair of Sea Lions came to the surface with Chum Salmon in their mouths, thrashing about and eventually swallowing the salmon. Not far from shore, several immature Gulls, a large flock of Common Mergansers and a few Harlequin Ducks were competing for the scraps of Salmon that were left behind from the huge Sea Lions.

The tide was up and heavy waves pounded the shore. Between the waves we saw eight Black Turnstones and one Dunlin racing towards the estuary. Further out on the Strait,there were several Pacific Loons flying just above the water. A Common Loon, a Horned Grebe and a Western Grebe gave us quick glances between waves.

Along the boadwalk, we saw a large flock of Bushtits and Golden-crowned Kinglets fly quickly in the bushes and then disappear. A pair of Bald Eagles were perched high in a Fir Tree off the trail.

The Backyard Wildbird & Nature Store's weekly bird walk in the Parksville/Qualicum Beach area is on Tuesday mornings at Participants meet at the at the Parksville Beach Community Park, at the parking area in front of the playground at 9 a.m. Rain and/or heavy winds will deter us--but we will plan a walk for every week. Everyone is welcome to bring their binoculars and join us for a morning of birding. For the weekly location of the birdwalk, please call Neil Robins at 250-954-1928 or The Backyard Wildbird & Nature Store at 1-888-249-4145.