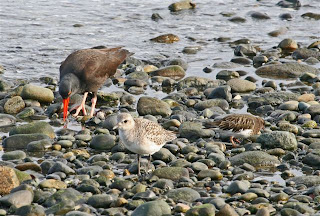 Highlights of the morning included the sighting of over two hundred Bald Eagles perched in the conifer trees around the Estuary and along the River. We saw at least one hundred Trumpeter Swans near the mouth of the Little Qualicum River. Throughout the morning, the Swans left in groups of six or eight and flew right over us as they left the Estuary. We spotted a rare Little Gull among the Bonaparte's, Mew and Thayer's Gulls near the mouth of the River. Further out on the water were large flocks of Black, Surf and White-winged Scoters, Common Mergansers and Harlequin Ducks. Dozens of Harbour Seals and Sea Lions were resting in the water past the Gravel Bar--likely after having a grand feast on the abundant Chum Salmon in the Strait.

The Backyard Wildbird & Nature Store's weekly bird walk in the Parksville/Qualicum Beach area is on Tuesday mornings at Participants meet at the at the Parksville Beach Community Park, at the parking area in front of the playground at 9 a.m. Rain and/or heavy winds will deter us--but we will plan a walk for every week. Everyone is welcome to bring their binoculars and join us for a morning of birding. For the weekly location of the birdwalk, please call Neil Robins at 250-954-1928 or The Backyard Wildbird & Nature Store at 1-888-249-4145.