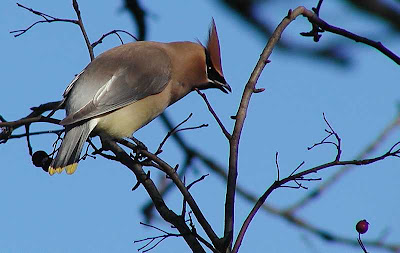 The male American Kestrel was seen again on the hydro lines overlooking the Ugly Dwarf Meadows at Nanoose Bay.

Evening Grosbeaks have been visiting feeders in the 100 block of Meridian Way in Parksville.

Saturday June 27:
An American Kestrel was seen on the hydro lines overlooking the Ugly Dwarf Meadows at Nanoose Bay.

Six Caspian Terns and two Osprey were seen on the flats at the Nanaimo River Estuary near the Living Forest Campground in south Nanaimo.

Thursday June 25:
A aberrant brown Pileated Woodpecker was seen in the Departure Bay area of Nanaimo.

Wednesday June 24:
Two Vesper Sparrows were seen along the fields at the Nanaimo Airport in south Nanaimo.

An Evening Grosbeak was spotted near Dawkins Lane in Nanaimo.

Monday June 22:
A Great Horned Owl was seen perched by the north side trail about 150 meters east of the deep bay, at the western side of Neck Point Park in Nanaimo.

A Ring-necked Pheasant was seen in the Chase River area near Beck Creek in south Nanaimo.

Sunday June 21:
Over ten Cedar Waxwings were seen near the Beaver Ponds at Morrell Wildlife Sanctuary in Nanaimo.

A male and female California Quail with fourteen puffball chicks were seen in a yard in Fairwinds in Nanoose Bay.

Saturday June 20:
An adult female Lark Bunting was seen in the parking lot at Botanical Beach near Port Renfrew.

Wednesday June 10:
An Eastern Kingbird was spotted perching and flycatching on Mittlenatch Island.