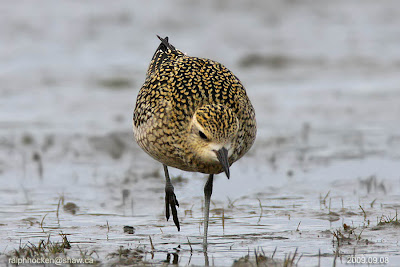 We also saw a Painted Turtle and a River Otter on the Millstone River.

Thursday September 10:
An American Kestrel was perched on a hydro line along Stanford Avenue, over looking a farm field in Parksville.

Tuesday September 08:
The Tuesday bird walk went to the Plummer Road side of the Englishman River Estuary in Parksville. The morning was sunny and the winds were calm--a great day to be birding. Among the highlights was the sighting of a Yellow Warbler and an Orange-crowned Warbler gleaning insects from a short bush near the trail. Overhead were four Black Swifts hawking insects. We saw Western Sandpipers, Least Sandpipers and a Long-billed Dowitcher along the mud flats at San Pareil. There were two Harlequin Ducks, Horned Grebes, Red-necked Grebes, Common Loons, Bonaparte's Gulls, Ring-billed Gull, California Gulls and Mew Gulls on the Strait of Georgia.

An Osprey flew over a water hazard at the Arrowsmith Golf Course; a Coopers Hawk flew overhead and a Bufflehead was spotted on the water.